The UK is among the happiest nations when it comes to family relationships, according to an international study, with Britons enjoying a good home life and the company of their relatives. 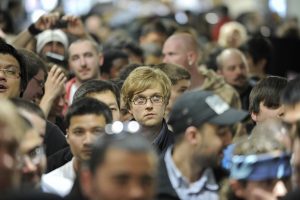 By contrast, the reputation of the British as reserved and aloof has been borne out, with its ranking as one of the unfriendliest nations.

Britons were placed second from bottom of the OECD league table of developed nations in terms of knowing neighbours. Only Germany is more antisocial.

The findings come in a set of international comparisons of wellbeing and life satisfaction data drawn up by the Office for National Statistics using its own and OECD figures.

Britain ranks about average for life satisfaction overall — below Australia, Canada and Sweden but above Italy, Japan and Poland.

The report found that Britons feel neither more nor less satisfied with their lives than before the financial crash. UK residents give an average score of 6.8 out of 10 for feelings of life satisfaction, the same as in 2007. However, the residents of many other countries feel much worse today than before the crash, including Greece, Ireland, Spain and Portugal, which suffered the worst economic problems, many of which continue today.

The UK was one of the happiest nations for family relationships, with more than 90 per cent saying that they were very happy or fairly happy with their family life, the fourth highest in the developed world. Sweden and France, both considered family-focused societies, performed poorly, both coming below the OECD average.

Ruth Sutherland, the chief executive of Relate, said that there were many benefits to happy family relationships. “We know that there is a strong connection between our relationships and our personal wellbeing,” she said. “Relationships act as shock absorbers when times are hard and also help us to achieve our goals. Family relationships are an important part of this picture, so it is good news that the ONS data shows 91 per cent of people in Britain reported being satisfied with their family life.”

A separate report from the OECD found that immigrants to Britain had some of the best employment prospects, with 68 per cent having a job, just above the rate for those native to the country and well above the EU average of 62 per cent.