Pinch is one of Britain’s coolest furniture brands. So what’s the secret of its serene style? ‘Two kids, 19 months apart, in nappies,’ meet the couple behind the brand. 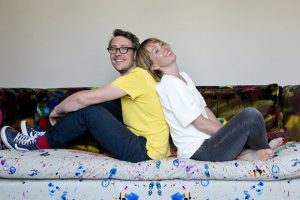 Russell Pinch and Oona Bannon, the couple behind Pinch, are feted by design insiders as the king and queen of serene. Their graceful, tactile furniture has long been on every tastemaker’s wish list. Now the brand has quietly turned 10, and its “rigorously unexcessive” style is finding increasing numbers of fans.

The couple who pioneered the perfection of the everyday, with crafted yet contemporary and understated seats, tables, lighting and cupboards, have seen blogs and magazines devoted to similar themes. Lookalikes of their key designs pop up on the high street and in the collections of young pretenders.

Timelessness has become a hot trend, thanks largely to these two. And in case anyone doubts that real families can live with such stylised simplicity, their newly refurbished home in Brixton, south London, demonstrates how their calm, considered design cohabits with two young kids.

“I am a lucky, lucky man,” Pinch says, looking back on a decade in design. A sizeable stroke of fortune came early in his career. In 1993, when he was 20, fresh from Ravensbourne College with a BA in furniture design, he wrote to Sir Terence Conran asking for work and was offered the post of first design assistant. At first, he turned the job down because it was based in Berkshire — having grown up in Gloucestershire, he wanted to work in London. But Conran would not take no for an answer. “I will always remember my mum saying, ‘It’s Terence Conran on the phone for you.’”

He recalls the “apprenticeship of a lifetime”. “Conran would say, ‘We’re sending you to India for three weeks, visiting fabric mills and metalwork shops.’ I’d never been on an international flight before.” By 1995, he was senior product designer at Conran, working on supersonically prestigious projects such as the interior redesign of Concorde.

A peek at Pinch’s stylish range 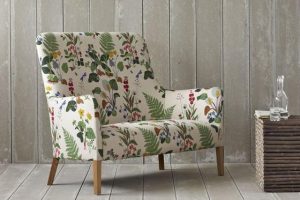 Pendel sofa, 2008: probably Pinch’s best-known piece: a clever mix of sculptural seat and patterned upholstery, the two-seater was the photogenic darling of the interiors magazines when it launched in 2008 (£2,495, excluding fabric)

Work and home life have always been intertwined for the couple. Their Brixton property became the firm’s first HQ, in 2004. They had met at Pinch’s branding agency, the Nest, which counted Cadbury, BA and WHSmith among its clients. Both parties soon concluded that a career devoted to corporate puff didn’t appeal, though Bannon took a fastidious approach to her work as an account manager.

A yoghurt client once asked if she could make the product look organic when she did the packaging design. She responded: “Well, is it organic?” It was not. Views were exchanged. The relationship never quite recovered. Bannon finds the culture-clash hilarious now, but says: “It was getting depressing. I can’t bear smoke and mirrors.”

The couple had married and bought the two-storey terraced house in 2003. Then, a year later, Pinch decided he wanted to return to furniture. Bannon still teases him about this. “I married the director. I thought, ‘This is going to be a great old life.’” Pinch is still sheepish: “The thing was, we hadn’t got any money, so what happened was I gave up my well-paid job and Oona had to carry on working because we had a mortgage to pay. She basically carried on milking the yoghurt pots so we could plough it into our other creative pursuits.”

So the couple made a list — a life and work manifesto. The main points: Pinch wanted to reconnect with making, and to see trees (“I’m a country boy at heart”); they both wanted to be in control of their creative output and proud of their work; and if they had children, they wanted to be able to see them enough.

Today, Bannon has long left the duplicitous dairy products behind, having taken on the role of creative director at Pinch, and the firm is thriving: “We’ve grown pretty much 30% year-on-year for four years.” They spend 12 weeks out of 52 in their second home, a renovated stone barn in the Charente-Maritime region of France, surrounded by nature and accompanied by their daughters, Ada, 7, and Floris, 6. One could say that the plan is taking shape. 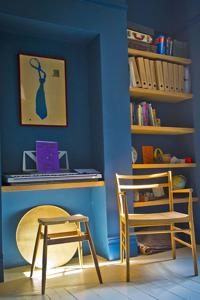 The couple pioneered the perfection of the everyday, with contemporary, understated seats, tables and lighting (Francesco Guidicini)

Their London home has also taken on a new form. Driven by a need for more space, they moved into a rental property last June for a four-month refurb, then returned home after six months — “way too early, with practically a cement mixer in the sitting room” — to focus on the details themselves. The large bathroom was carved up to create a third bedroom upstairs, and the ground-floor layout altered and extended to give them more cooking space.

“When we bought this house,” Pinch recalls, “the first night, we sat on the step in the garden with a bottle of champagne, and we were saying, ‘It’s huge. We don’t need a house this big. It’s ridiculous. What are we going to use all the rooms for?’” The answer, of course, was Ada and Floris. Just as their daughters inspired the recent building project, they also contributed to the development of their quiet style. “We had two kids, 19 months apart, both in nappies,” Pinch says. “We wanted to create an environment that was calming and peaceful because our lives were so hectic.”

The kitchen is now uncompromisingly unflashy. “We didn’t want a brutal meeting between new and old,” Bannon says. “We didn’t want bifold doors against Victorian brick, and we didn’t want the seam where the two joined to be attention-grabbing. We wanted a flow.” So there are no hard lines — the ceiling is curved — and while the extension includes enough glazing to allow a good view of the brick-paved back yard, it is several postcodes away from the clichéd glass cube. Locker-sized cupboards conceal, I am told, armfuls of their daughters’ detritus. “You can do a nice easy sweep and it becomes a bit of an adult space again,” Bannon says.

The materials are the stars of the makeover. A herringbone pattern of reclaimed mahogany parquet on the floor mirrors Tudor bricks in similar formation in the outdoor space. The kitchen countertops are slabs of teak, salvaged from a science lab, and cabinet fronts are made from an industrial material called phenolic ply. “It’s what you use for shuttering concrete and lining the backs of vans,” Pinch says. “It’s hard-wearing and nice and cheap, which is the reason we used it.

“We laminated it together, then — this is the story of our lives, really — we spent all our money on the drawer liners.” He opens the drawers with a flourish. The luxury timber interiors emit a rosy glow, like gold doubloons in a pirate’s chest. “Solid cherry, with dovetailed joints — and there are secret drawers. You’ve got to have secret drawers.”

Those hidden drawers illustrate the secret of the firm’s success. It’s run by a pair of perfectionists whose real mission is to please themselves. Another of Bannon’s pre-Pinch jobs was reviewing hotels for the Mr & Mrs Smith guides. “I wasn’t very good at it, because my standards were too high,” she says. “The boss would say, ‘You want to see the big picture.’ I’d say [comedy whine], ‘But I can’t see the big picture because of the laminate flooring.’”

The couple have founded a business based on obsessing about minutiae. “We like doing products that aren’t easy to make,” Pinch says. “The normal way of doing things is, you design a piece and it goes through a process of making it commercially viable. Not us. The Anders light is an example. We took the design to lighting manufacturers and they said, ‘No problem — we can make that in plastic for you.’ We said, ‘Nonononono, we want it in a natural material.’ Eventually, we met a clever milliner who made it beautifully.

“We also work with Rupert Lampard, in Gloucestershire, a friend from primary school. He’s a brilliant artist’s maker who works for Damien Hirst. He’s about to do our coffee table.”

The new coffee table, which will be unveiled in September, will mark the firm’s 10th anniversary — a year late, but hey, life has been busy. “We thought, ‘We could have a big party, or we could spend the money on developing something we couldn’t normally afford,’” Pinch says. “We wanted to do something creatively indulgent that was a bit of a departure, so we looked at various materials — glass, metal — and settled on Jesmonite. It’s plaster, very strong, with many of the characteristics of concrete, but much more gentle.”

He adds, with glee: “The mould looks like a spaceship. It’s totally indulgent. It’s our treat to ourselves. It doesn’t matter if we don’t sell any.” I’d say it’s best to get on the waiting list now.