Once associated with conservative work wear and school uniforms, the colour is making a big splash in the design world. 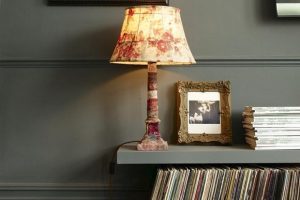 The forthcoming film Fifty Shades of Grey is likely to make interior design fans think of the colour grey rather than Christian Grey — the S & M-loving billionaire of E L James’s trilogy. The colour has been as big in the design world as the Fifty Shades books have been in the literary world over the past few years and looks set to retain its crown, despite threats from newcomers such as marsala — forecast to be the shade of 2015.

Grey was once associated with conservative work wear and school uniforms. It was seen as dull and boring. Then two years ago it was everywhere. The interior designer Mhairi Coyle says: “Everyone was asking for it. It was in every house and coffee shop I walked into.”

Its sudden rise in popularity originated from industrial style. This rough-luxe aesthetic has its roots in the grubbier side of town — rundown neighbourhoods with derelict buildings. In fact, Coyle thinks there is something a bit punk to it. “It’s a rejection of pinks and pastels,” she says. “It has a heavy business-like presence and it works against anything that is too frilly.”

So, why did everyone fall for grey? The interior designer and blogger Abigail Ahern thinks it’s because “it’s sophisticated, inky, dramatic, and everything looks beautiful against it — particularly if you go for a dark backdrop. As a neutral, it’s the perfect antidote to boring old white, cream and beige.”

Following on from minimalist style where white dominated, the colour grey became the acceptable alternative to a strictly monochrome scheme. Most of us like the idea of colour but when it comes down to it, we are more comfortable with neutrals.

It is practical, too. Decor trends are now like fashion trends. An “in” colour changes every season so it also makes sense to choose a colour that won’t look dated in a couple of years’ time. Just update your home with accessories.

And it goes with every style of home, as the eponymous owner of the design and paint company Edward Bulmer, emphasises: “The beauty of grey is that you can use it to create modern look or a traditional look with a twist. It can set off Old Masters paintings really well as well as modern art.”

He extended his paint range by a further 50 per cent last year and included many more greys. “It is a recognition of its popularity,” Bulmer says. “People have been asking for them and we thought ‘If we can’t beat them, we’d join them’.”His range of paints features smoky greys, which have a warm undertone.

The interior designer Susie Atkinson suggests painting woodwork (doors and architraves) a dark colour to contrast with a paler wall colour. “It gives it a sense of calm and is a great backdrop for art work,” she says. Coyle recommends using grey on a wall where there is naturally a shadow. Ahern prefers to “Go the whole hog and paint out walls, floors and ceilings. It’s the perfect colour to codify and anchor large spaces.”

Designers are starting to move away from industrial chic (yes, enthusiasm for this look has finally started to wane) which has meant that some shades of grey are starting to look past it. Dark grey, almost black, is considered more fashionable.

Ahern has painted the bottom floor of her home — an entirely open-plan space— in Madison Grey, a dark inky grey from her own paint range. A 2.5 litre tin of emulsion costs £33. She says: “I developed the colour to have green undertones, so it’s like swimming at the bottom of the lake. The hue changes throughout the day according to the light, and it’s beautifully serene and calming as well as being seriously cool.”

She offsets the grey with greens and blues: “It looks fab paired with metallics — gold really pops against it.”

The hottest shades
Farrow & Ball says that its shade Down Pipe, a darker and cooler grey, has a real following. According to the paint company, the shade has a “contemporary feel when used on all four walls, creating a mysteriously moody interior”. A 2.5 litre tin of estate emulsion costs £38.

Chic Shadow, a brown grey, and, Polished Pebble, a pale grey, are Dulux’s bestselling greys. Both cost £21.29 for 2.5 litres.

Mhairi Coyle says that the Paint Library is useful because it lists variations of one colour in an idiot-proof way (for example Sand I, Sand II), from light to dark, so it is easier to visualise.