The Scottish government rejected an offer to run a free national “baby box” scheme from the world’s leading provider, The Times can reveal. 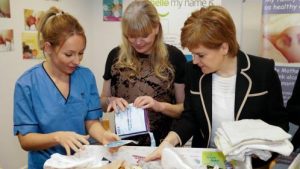 The US-based The Baby Box Co. told the Scottish government it would be able to provide a scheme free of charge if parents agreed to complete a short antenatal education programme it is already successfully delivering in England, Ireland, America and Canada.

The company said the SNP government preferred a scheme in which baby boxes were distributed as gifts without conditions.

Nicola Sturgeon launched a pilot scheme last month whereby baby boxes containing products and information are given to every new set of parents in Scotland at a cost of £100 each, or £7 million a year.

However, the The Baby Box Co. provides boxes at no cost to the NHS in England in exchange for the ability to interview their healthcare experts about the topics which are important to local parents, such as safe sleep, breastfeeding, substance abuse, fatherhood engagement, perinatal mood disorders and nutrition.

The antenatal information is provided in a multi-lingual, audio-visual format. Once expectant parents review the online videos developed by local healthcare providers and fill in a questionnaire, the company is automatically notified of the achievement. The baby box is shipped at no cost to the family free of charge within two weeks.

Karen Joash, a lead researcher on baby box provision and a consultant obstetrician and gynaecologist at Queen Charlotte’s & Chelsea, the first hospital in the UK to introduce the Baby Box Co. scheme last June, urged the Scottish government to reconsider.

“The baby box is an incentivised platform to get your education out there and improve health outcomes,” Dr Joash said. “If you just give something out in a box it isn’t going to benefit anyone unless you are tying it to antenatal education.”

Dr Joash said no-one from the Scottish government had spoken to her to find out whether the scheme worked or was effective.

Tracy Baxter, a practice development midwife at Colchester Hospital, which has been running a The Baby Box Co. scheme since October, said it had proved an overwhelming success with parents.

“It has literally cost us nothing which in the current NHS financial environment is brilliant,” she said.

“We wouldn’t have been happy if personal data was being shared with third parties but it hasn’t been.”

The Scottish government said taking up The Baby Box scheme would have “involved families’ personal data being shared for commercial purposes.”

But Kevin Haberer, chief technical officer of The Baby Box Co., said the Scottish government had been told that personal data, amounting to an address, email and phone number, is never shared with third parties.

“Our servers for UK data collection are located in the UK—not the USA—and on August 8, 2016 there is correspondence with the Scottish government in which our team confirmed directly that families’ personal data would not be shared or sold for commercial purposes in accordance with our privacy policy,” he said.

The Baby Box Co. was set up in 2013 by Jennifer Clary, a social entrepreneur based in Los Angeles, and distributed one million boxes last year.

It works with hospitals and governments in more than a dozen US states, a hospital in Ireland and two in England. They are about to launch a national scheme with the Canadian government. To make money, it sells baby boxes to private individuals and organisations through its website.

The Scottish baby boxes for the pilot scheme are being supplied by the APS (Scotland) Group. The eventual supplier will be confirmed following the completion of the government’s procurement strategy.

A Scottish Government spokesman said: “We welcomed The Baby Box company’s interest in Scotland’s Baby Box. Like them, we are keen for it to have an educational focus as part of a range of measures to support families in their children’s earliest years. Materials and contents which help to tackle inequality, improve health and raise attainment will also feature in the baby box which every newborn child in Scotland will shortly be receiving

“The company approached us offering to provide boxes and minimal contents for the pilot, however parents would only receive the box if they were able and willing to register online with “Baby Box University”, their USA-based education platform.

“Registration would have involved families’ personal data being shared for commercial purposes which was an obvious concern. Also, parents who were not able or willing to share their information would have been excluded from the pilot. That would have been at odds with our ambition to give all children the best possible start in life.”

But Scottish Conservative chief whip John Lamont said: “People will think the SNP has turned down a valuable free scheme based around education, and instead opted for a universal product which encloses a propaganda signature from the SNP government.

“The Scottish government will have to have an extremely good reason for this £7 million-a-year decision.”