Jeremy Pitts left London to live and work in a Sussex wood, creating objects from this most versatile of materials. 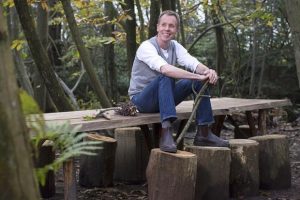 If you go down to a small wood in East Sussex, you will certainly be surprised. Down a muddy track that winds between mature and fallen trees is a simple timber house — full-height windows facing out across a grassy knoll. The clues become obvious only once you’ve met the owner.

Jeremy Pitts lives in the perfect spot for someone with a healthy obsession for wood, furniture and timber buildings. After a successful career as design director of Studio Reed in London, creating bespoke interiors for the likes of David Bowie, Sir Paul and Lady Smith, and Simon and Yasmin Le Bon, Pitts has relocated to the High Weald. Here, he is able to indulge his fascination for this most versatile material — it is becoming an ever-more popular material as a wall covering — and have a timberyard at the end of his garden. Pitts has been commissioned by Margaret Howell, the clothing retailer, to make a table for its Wigmore Street store, which specialises in classic British fashion with a twist. His work is also featuring in the one-day sale of craft homewares by Remodelista, the San Francisco blog.

Pitts has a working history of seeking out “one-man bands” and the best craftspeople, rather than going straight to larger companies used in the construction industry. “Working with skilled makers from early in the design process brings about unforeseen opportunities which you don’t get if you sit behind your desk, draw and then issue information,” he says. “For me, it’s about collaboration rather than prescription.”

He’s also a great believer in collaborating with, rather than trying to control, his materials: “Industrial methods tend to remove their character and soul. Wood, for example, is chopped into submission rather than being understood and selected.” Instead of entirely geometric lines, Pitt’s pieces work with the splits, knots and gnarled edges, which are hand-worked to bring out their natural beauty rather than being filled or cut out.

His move into designing individual pieces of furniture came about when a client asked for a huge oak table made from a single timber board. “I went hunting for wide oak boards, with little luck, but chanced upon an enormous log of elm.” The oak table was not to be, but Pitts made two enormous elm tables instead.

His furniture focuses on the piece of wood, usually hundreds of years old, and the rest of the design is subservient to that. The wide boards he favours are cut from native British trees such as oak, elm, walnut and ash. “I have a network of people around the country, who let me know when a large tree has fallen or been felled.” One such tree was an ancient elm on the east coast of Scotland, whose trunk was well over a metre wide and 9m long. “We had to cut it into two lengths to get it on the lorry and bring it back here,” he adds.

It’s clear that Pitt is dedicated to quality — and the associated challenges — rather than knocking together something quickly and easily. “In a woodwork lesson at school, we were supposed to make a pan-stand out of softwood. I was adamant I wanted to use oak.” He admits that the result was “appalling”, but you have to admire his determination.

Moving out to this wooded dell, with his wife, Fiona – a former knitwear designer for Missoni — and his sons, Tom, 14 and Ivo, 11, Pitts’s interest in timber has broadened. Processing the large trees he buys requires specialist equipment, a skilled eye and a willing saw miller, all of which he has been lucky enough to find locally, a benefit of working in an area steeped in woodland history.

Pitts stacks and seasons the boards for several years in his timberyard. “By seasoning it slowly, you keep its beauty; its colour and markings.” He demonstrates by showing me a photo of a walnut-lined office he has just completed and a magnificent agate-like bedhead made from elm. Other recent works include interiors and furniture for the innovative property developer Richard Upton and his wife, Roz.

Like his materials, the unique pieces (calling them “end products” would be wrong) are quirky and full of character: “I recently made a bunk bed for a circular room. It included a dumb waiter, in a time-honoured Heath Robinson manner, with a car’s cam belt as the concealed pulley.” The walnut-lined office features concealed storage compartments and an ingenious foldaway noticeboard covered in woollen Yorkshire suit-cloth. Wood may be one of our most ancient building materials, but he can always find new ways to use it.

“Living where I do has ignited my enthusiasm for woodland craft and using local and sustainable materials, ” says Pitt. He emphasises the fact that using local stock is not simply a trendy gesture: “The farther away you are from a material’s source, the less you can be sure of its history.” It follows that all of his furniture-makers are based in Sussex.

Working with local woodsmen, and living where he does — in one of the densest areas of ancient woodland in the country — brings sustainability into sharp focus: “We’re currently constructing a timber cabin treehouse which uses the texture of split coppiced chestnut and traditional underwoodsman crafts within a very modern design.” Coppiced woodland, for those who don’t know, is woodland that is cut and then regrown on a 15-year cycle.

The cabins sound enchanting — and a dream project for Pitts. As we look at the scale model on Pitts’s desk, he proudly talks me through the design features, the research involved and demonstrates the practical considerations. It’s clear that he’s as wild about wood as he was as a schoolboy and design student. Having spent a morning in this woodland haven, absorbing Pitts’s enthusiasm, this really comes as no surprise.