One London family will be spending Christmas within spitting distance of the piste, at their second home – a traditional Alpine chalet with a (very) cool interior 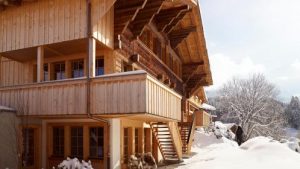 Architect Christina Seilern learnt to ski almost before she could walk and, although she now lives and works in London, her love of the Alps remains as strong as ever. She shares her passion with her husband, Dimitri, an entrepreneur, and their three children. To make the most of their time in the mountains, Seilern has designed a family chalet and holiday escape in the picturesque Swiss hamlet of Lauenen, not far from Gstaad.

“I grew up in the mountains and went to school in Switzerland until I was 18,” says Seilern, who runs her own architectural practice. “So I know this area really well. I have always been fascinated by traditional Alpine farmhouses and chalets. They are beautiful buildings, and we wanted to use some traditional elements but in a modern home. We really pared it down.”

Seilern and her family chose a very special spot, with the house perched on a hillside looking across the valley to the rising mountains opposite, dotted with occasional farmsteads and barns and a generous coating of pine trees. Here, she designed three separate new chalets, which share the same underground garage. Her own home sits at the centre of the triptych, while her mother, Louisa, has one of the houses next door.

The valley stops with a mountain range. That’s helped make sure this has remained a proper working village

“The village is nicely set apart from everything,” says Seilern. “The valley actually comes to a dead end and stops with a mountain range. That’s helped in making sure this has remained a proper working village. The house right below us on the hill is a farm, and so are the houses just behind us. In the summer months we are surrounded by pasture, and we go to buy our cheese direct from the farmers.”

Before designing the house, Seilern embarked on a miniature study of chalet architecture in the region, partly as a way of getting to grips with local planning restrictions. She sourced reclaimed timber from the area for the façade, complemented by fresher wood elsewhere, and created a large, overhanging roofline to protect the house and its balconies from the snow. One challenge was to introduce as many windows as possible, to dispel the twilight gloom common to many mountain chalets.

Behind the traditional exterior is a sleek, contemporary space. The mix of birch floors and steamed pine panelling is combined with exposed concrete and internal glass for the staircase surround, which helps the light to penetrate the chalet.

The lower level is partly devoted to a family den and bedrooms for Seilern’s three children: Gaia, 12, Yianni, 10, and Mia, 4. The upper level hosts a separate rental apartment, with the main family living spaces at mid-level, which enjoys some of the best views across the valley. Here, there is a subtle balance between open living areas and more private retreats. To one side of the staircase, the main sitting room is arranged around a large fireplace; to the other sits the dining area, complete with a breakfast island and a serving hatch to the separate kitchen alongside.

“We liked the idea of an open kitchen, but sometimes it can get really messy, so what we have now is more flexible,” Seilern says. “We added the buffet island in the dining room and that’s where we lay out breakfast or lunch, so we can serve ourselves. It also works as a bar, and the hatch means that the kitchen is not completely closed off.”

The master suite is on one side of the house, mixing the exposed concrete that forms the core of the building with wooden floors. There’s a splendid view of the valley from the bed, which faces a line of windows; the en suite bathroom alongside has a hotel-like quality to it, with a generous stone tub.

For Seilern herself, one of the greatest pleasures has been that the chalets serve as a family meeting point, with Seilern’s brother and his family also spending time here. Naturally, the whole clan is passionate about skiing.

“Dimitri and I tend to go ski-touring on some days, and for the rest of the time we will ski with the children,” says Seilern. “The children enjoy skiing off piste, which is more fun for all of us. And for me, having grown up in the Swiss Alps, this does feel very much like home – the fresh air, the snow, the skiing. We stay at home quite a bit and just enjoy it.”