Christmas is a special time of year in the home of interior designer Paul Carter. His approach? ‘Everything that doesn’t move gets a decoration on it’ 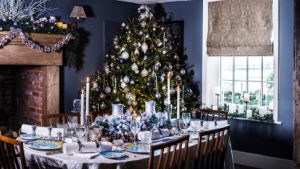 Christmas always comes early to interior designer Paul Carter’s red-brick farmhouse near Winchester – or at least talk of it does. He and his husband, Daniel, a partner in a communications company, start discussing the logistics in August. “It’s the topic of conversation on our summer holidays,” says Carter, and judging by the three trees sourced from the Cranborne Estate an hour or so away – one of them is 15ft high and fills the height of the vaulted ceiling of their living room – it’s easy to see why.

“Everything that doesn’t move gets a Christmas decoration on it,” he adds. There are 20 boxes of decorations in their attic, each containing a different colour theme, and they are used in rotation every two to three years. This year it’s the turn of gold in the sitting room and blues and greys in the dining room, and out come their favourite baubles bought over the years from Liberty and Fortnum & Mason in London, various branches of Costco and Bergdorf Goodman in New York.

When Carter explains that every one of the 18 family members who is invited to Christmas Day lunch is emailed in advance and told what colour wrapping paper they should be using, he is only half-joking. “I think a lot of it has to do with my father, who used to decorate our house so that it resembled a Santa’s grotto,” he says by way of explanation.

Not that Carter doesn’t have a sense of humour about their over-the-top eye for aesthetics. Their downstairs loo is adorned in chicken-feather wallpaper – a riposte to the charge that once they moved to the country, they would end up growing vegetables and keeping chickens. They did contemplate the chickens, he admits, but when they visited their local show and realised they were more interested in the chickens that matched the house rather than the ones that laid the best eggs, he knew it wasn’t meant to be.

Even so, he is insistent that their home is “not a show space”: their three dogs sleep on their bed and roam freely. It helps, too, that he favours a bold use of colour, although, as he points out, the colours aren’t always bright, obvious ones but a paean to modern elegance and the sort of livable family home that he creates for his clients.

His six-bedroom farmhouse, parts of which date back to the 1650s, certainly has enough rooms to flex his creative talents. There’s the dirty lilac paint in the library, wet sand in the sitting room, and the Plain English-style kitchen painted petrol blue.

Most of the reception rooms on the ground floor lead off from the flagstoned hallway with views out to the garden. You can just about make out the beautiful handmade barn the couple built, a structure that comes into its own during the summer with its barbecue area and covered seating for 14.

Because the house was bought from a developer, there was little to be done structurally. “We did have to redecorate, though,” Carter says. “It had been done up to sell in the style of a themed country pub with wrought-iron chandeliers.” They decorated it with finds from Lots Road auction houses in Chelsea and John Derian, the New York interiors mecca. Both he and Daniel are fans of Fifties Danish furniture, and this is the period from which their dining table, cabinets and sideboard have been sourced. “It’s fun to mix old with new,” says Carter, and the antique wedding chest, which belonged to his grandmother, is testament to that.

“It’s what we would save if the house was burning; that and the dogs as well as a few select pieces of art.” They’d probably try to save the Christmas Day china, too, which is – what else? – Versace’s Treasures of the Sea, trimmed in gold. It was a wedding present from Donatella herself because Carter has worked for the interiors team at the Italian fashion house. “At Christmas time, I operate on the basis that less really is just less.”