When Sara Zaske moved to Berlin seven years ago she was astonished by the German approach to parenting. The American-born writer panicked at a playground where children dangled from a 20ft wooden dragon while nonchalant parents drank coffee below and her cry of “Achtung! Nein!” was ignored. 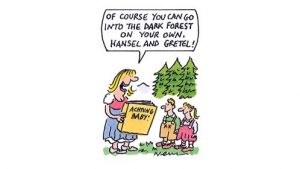 “I was shocked by the parenting,” she said. “They let their kids walk the city streets from the age of seven or eight by themselves and take the buses alone.”

Zaske, who moved to Berlin when her scientist husband took a job there, has written a guide to German parenting, extolling its virtues. Achtung Baby, due out next year, looks at how German families produce organised, academically successful and above all independent, resilient young people. Germany beats the UK in academic tests for 15-year-olds in maths, English and science.

“German children have more physical freedom — and more mental freedom. German parents are not so hung up on what career their children are going to do; they don’t make decisions for them when they become teenagers. They leave it up to the child to decide. In Germany parents think children have to find their own way. Teenagers aged 15 and 16 come and go as they please from their parents’ house and take vacations by themselves.”

Zaske’s is the latest in a series of books that espouse methods of parenting very different from those in Britain and America, where “helicopter parenting” — which places children under pressure to succeed under their parents’ watchful eyes — is in vogue. A growing number of critics warn this has created “generation snowflake” — whose members are more likely to suffer from mental health problems, drop out of university and live with their parents into their twenties and thirties than their predecessors.

The German approach Zaske so admires includes letting children travel on their own around cities; giving them playgrounds where they can build dens using proper hammers and saws; letting children as young as four learn about and handle fire and sharp knives; and insisting that young adults who live with their parents pay rent and do their own laundry.

Junior schools involve lots of play and a less academic curriculum for young children than British or US pupils face. Manners and punctuality are habits drilled into the young in Germany.

School pupils are taught about sex aged six or seven, and parties are held to mark an adolescent’s coming of age at 14.