She’s the woman who brings order to celebrity homes. We put her to the test. 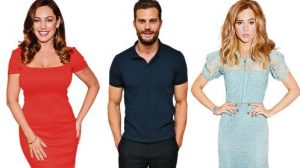 Vicky Silverthorn knocks on my door at 9am sharp and I open it to find her smiling and flanked by two assistants. She has come to spend the day decluttering my house because, well, that’s her job. Silverthorn is a professional declutterer, somebody who promises to bring order to the quiet chaos of your home. That can include everything from rearranging wardrobes to sorting through piles of unopened post to conducting mass audits of every single one of your possessions and seeing what you want to keep and what you’re prepared to part with.

Many of Silverthorn’s clients are famous: cash-rich, time-poor celebrities who have discovered that they own quite a lot of stuff and that it’s starting to get under their feet. “Jonathan Ross, Jamie Dornan, Suki Waterhouse, Kelly Brook, Robbie and Ayda Williams,” she lists. “Ugo Monye, the rugby player. There’s a specific pop star who’s been trying to book me for six months, but they have so little time it’s always, ‘Can we have you tomorrow?’ and I can’t do that. You can have me in eight weeks. She doesn’t even have the time to book me, let alone go through the process of decluttering. And every time she goes on tour she comes back with a mass of new stuff that’s just filling up her house.”

That said, Silverthorn is not — and she emphasises this early on — someone who works with hoarders, which is to say, people with a psychological condition that prevents them from chucking stuff out. “People phone up and say, ‘I’m a bit of a hoarder.’ And then I ask them, ‘Are you actually a hoarder?’ And they say, ‘Oh, God no.’ But sometimes we’ve gone into homes and there has been so much stuff, and I know within five minutes of chatting to a client if they’re going to be the sort of person who is going to be able to get rid of it or if it’s going to be massively challenging.”

Before letting Silverthorn have a look around the small house I share with my girlfriend, our toddler, our two-month-old, our cat plus my dad who is visiting and has been sleeping on the sofa for the past few days, I try to explain that our home has definitely been tidier. Like, maybe in 2013. She smiles reassuringly and we look around the lounge.

“You’re not OCD or into perfectionism,” she eventually concludes, which I suppose is true, but this is a good thing, she adds quickly. “Creating perfection is not what we try to do. Decluttering is not about turning your house into a show home. It’s about creating a relaxing space where everything has a place.”

Silverthorn is friendly, enthusiastic and efficient. She instructs her assistants, Alicia and Joanne, to begin deconstructing my living room so that it can be reassembled to look less like a place where drunk toddlers have been left unsupervised.

She started her business six years ago after working as a PA, most notably for Lily Allen, the singer, and it was during this period of constant touring that she realised how much of a “buzz” she got from helping to organise other people’s lives. She describes, for example, the time when she had to run on to the stage at Glastonbury to recover a £40,000 necklace that Allen had discarded during her set. “The crowd started cheering because they thought it was Lily coming back on to do an encore, but then they saw it wasn’t her and started to boo. There were 150,000 people all booing me,” Silverthorn says, laughing.

Fear of letting go is the biggest thing, the worry you’ll feel regret

To begin with, when she explained that she had gone into business as a full-time declutterer, she would often receive muted sarcasm. “I called those people ‘the head tilters’. It was all a bit, ‘Oh, how’s that going?’ ” But for the past four years she has been booked solid, which isn’t bad work for someone who charges a day rate of £675 plus VAT.

Silverthorn believes her success is at least partly because we no longer live in an age of conspicuous consumption. “The wave of buying crap is over. People are starting to realise that experiences are more important than possessions,” she says, meaning we would rather enjoy the experience of living in a nice, tidy, calming environment than a home heaving under the strain of once-valued stuff.

Also, she says, it can be stressful to live in a house where you’re constantly losing things or moving piles of clothes and papers from one room to another. “We’re in an era of things like Headspace, of meditation apps and yoga classes and NutriBullets. Of putting value in things that make us feel good and relate to our health. But if you open your eyes after meditating and the first thing you see is clutter, then you’re undoing it,” she says. “I think people are cottoning on to that.”

By now, Silverthorn and her team have reassembled my living room. Order has been brought to bookshelves, heavy children’s toys have been strategically stored in non-lethal locations, ie at ground level, and old bills and bank statements have been collated and categorised. There are, however, piles of miscellaneous items they want me to make big decisions about.

“We’re not sure what this is,” says Silverthorn, holding up a weird black plastic thing. I tell them that I don’t know what it is either, so they add it to a pile they call the “ask Ben’s girlfriend pile” (it turns out to be a very important piece of pram). Then they hold up a half-eaten bag of yoghurt-coated cranberries. Hey, I remember those, I think. They’re really old. “They can go,” I tell them confidently. Same deal with a load of dead Biros.

“What about this head torch?” asks Silverthorn. I tell her I don’t own a head torch. “That’s mine,” says my dad, who is sitting reading a newspaper in the corner of the room. “I bring it with me when I stay with you so I can find my way to the toilet at night without turning the lights on and waking you up.”

We keep going. Various items are shown to me and I decide their fate. I grit my teeth and pull the trigger on a load of dog-eared music magazines, although I politely explain that Silverthorn and her assistants are going to have to get me into some kind of choke-hold if they want to bin my collection of vintage Dungeons & Dragons manuals. But she understands. “Fear of letting go is the biggest thing when it comes to decluttering. The worry that you’ll feel regret, the worry that you’ll need this particular thing,” she says.

Apparently a lot of new divorcees — women, predominantly — come to Silverthorn for this very reason. “The couple splits up and the wife is in the house and is thinking about moving, and they’ve spent years of their life building a home. And for all that to collapse?

“A big part of decluttering is not just the physical aspect, it’s the emotional decluttering of the previous life. And while there are certain people who can get rid of everything in one go, at least half my clients can’t do that, and have to get rid of things bit by bit. But say we get rid of 20 of your records. You get used to the fact you don’t have those records. You realise you’re not going to die. And as soon as people get used to that feeling, they do it more and more. I never force people to let go of things.”

I ask if, in the process of turning people’s houses upside down, she accidentally stumbles across, y’know, embarrassing items? Possibly in people’s bedrooms? Possibly left unwittingly on display and/or on charge? “Oh, yes,” she says, giggling. Alicia and Joanne join in too. “In that situation we have to make a decision about whether we’re going to put it back exactly where it was or whether the client isn’t going to feel awkward if we mention it. Haha. You can imagine. But it doesn’t faze us. There’s absolutely nothing we could find that will faze us.”

A few hours later I go into my bedroom, which Silverthorn has been decluttering with my girlfriend. “We have moths,” says my girlfriend, slightly accusatorily. “But only in one of your cupboards,” adds Silverthorn, smiling. The upshot is that one suit and several old shirts are summarily disposed of. To this day I’m convinced that the two of them chucked out quite a few items of my clothing although I can’t seem to prove it. Certainly some veteran boxer shorts have vanished.

Anyway, next door they have organised all our children’s clothes by age, which more than makes up for it. And it goes on like this: useful, practical, relatively minor alterations to where things go or how they are stored coupled with a fairly rigorous regimen of binning stuff.

By the end of the day our home is absolutely tidier and more functional. With the exception of those boxers, I actually know where things are now, which means I ransack the place less, which I suppose can only be a good thing.

“I’m in a very privileged position,” says Silverthorn before she goes. “Who else in your life would you let come into your house when you haven’t tidied up apart from your mum or dad? Who else would you let root through your pants?”
Start With Your Sock Drawer: The Simple Guide to Living a Less Cluttered Life by Vicky Silverthorn is published by Sphere on September 8, £12.99