It’s the most predictable, and most painstakingly researched, move that any family makes: searching for a leafy enclave where your happy, gifted offspring will be able to frolic in the countryside while effortlessly learning their times tables and table manners. 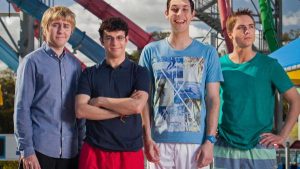 But what happens when they outgrow the primary schools, parks and soft play areas you spent so long checking out? Often, far less thought goes into picking a spot that will suit teenagers as well as tots. And, given just how much can go wrong when adolescents have nothing better to do than hang around a bus shelter or sit sexting in their bedroom, that’s probably a serious oversight.

So, if you want to live in a place where your teens can be healthy, happy high achievers, what should you be looking for? Outstanding schools are a given, but just as important, says Janey Downshire, one of the authors of the parenting guide Teenagers Translated, is the opportunity to mix with other teenagers. “Socialising is such a vital part of development,” she says. “Since the arrival of the internet, we have been afraid to let young people actually go out, but it’s important that they do.

“From a parent’s point of view, the ideal thing is to be close enough to a large town or city that they will be able to go out, but far enough away that any outings have to be planned, agreed and budgeted in advance.”

Other factors that Downshire highlights include being able to take part in sports and hobbies, part-time jobs — “very good for self-worth” — and decent internet access. “I know there’s research out there that says social media is contributing to a rise in depression and anxiety, but not being able to contact your peers while everyone else can isn’t good for confidence either,” she says.

Exclusive research from Hamptons International estate agency has identified some of Britain’s best places for teenagers. Starting with access to an outstanding secondary school, analysts looked at the number of other teens in the area, wi-fi hotspots, local cinemas, public transport and the chance of getting a weekend job.

“While parents prioritise the schools, teenage children are often looking for other things in a new neighbourhood,” says David Fell, a research analyst at Hamptons. “The search for independence means that good public transport, the ability to make new friends and a choice of places to hang out are all near the top of the teenage wish list. Finding somewhere that caters for all of this is a step towards a happier home.”

The most teen-friendly places, he adds, tend to be smaller towns, not larger cities — though that’s mainly because of the lack of sporting facilities in densely populated urban areas. Semi-suburban areas of London such as Bexleyheath, Greenwich and Muswell Hill all score highly on the other factors.
The top five

Chichester
The ultra-respectable West Sussex town is better known for mustard cords than low-slung jeans, but Hamptons International’s research reveals that it’s the best place in the country to bring up teenagers. There are two outstanding state secondaries, Chichester High and Bishop Luffa, and good independent options to serve 3,500 teenagers — a whopping 7.6% of the local population — and plenty of wi-fi hotspots for downtime.

The seaside location adds windsurfing and sailing to the mix (with lots of summer holiday courses on offer), as well as seasonal holiday jobs — options that you won’t find in many other places. There’s plenty of hospitality work on offer at nearby Goodwood.

Socially, Chichester is not quite as lively. It has two cinemas, but the only nightclub, Thursdays, closed down a few years ago. A big night means a train journey to Brighton (50min) or Portsmouth (20min). And living here doesn’t come cheap. A good-sized family home will set you back at least £500,000.

What the local teens say The sky’s the limit: one local airfield is offering a flying scholarship for teenagers.
Altrincham
This prosperous suburb in the borderlands between south Manchester and the Cheshire footballer belt meets several of Janey Downshire’s criteria. It has two outstanding schools (Altrincham Grammar School for Boys and Altrincham Grammar School for Girls, both highly selective), plenty of thriving sports clubs and a cinema. Best of all, it’s a 25-minute tram ride from the bright lights of Manchester — and a 30-minute Uber back if the partying goes on later than the trams and the parents’ bedtime.

The high street has more than its fair share of empty shops, but that’s not a problem when most teenagers would rather head to the Trafford Centre or the Urban Outfitters in the city centre. There’s no shortage of part-time jobs, according to Hamptons’ research, but with a four-bedroom house costing about £500,000 — or considerably more in posher Hale, next door — it’s safe to say that this is Bank of Mum and Dad country.

What the local teens say Peri-peri, please. Nando’s, hurry up and open.

Skipton
It’s not easy access to the beautiful Dales countryside that makes Skipton such a good place for teens (if only, the parents sigh) — though they can travel on the Dales Hopper bus routes for £1. Instead, it’s all about education. In St Ermysted’s and Skipton Girls’ High School, the North Yorkshire town has two leading selective single-sex state schools, while Craven College’s apprenticeships are highly regarded.

There’s plenty to do, with a bowling alley, a cinema and a Pizza Express, as well as a Next superstore and a New Look. For nightlife, the locals seem to prefer Bijou, in Bingley, to Skipton’s Kooky. Or they and their smartphones can settle in on the train for the 45-minute journey to Leeds, where the entertainment on offer has been enhanced in the past few years by the opening of two shopping centres (though it’s a stretch to imagine under-20s sharing in middle-class Yorkshire’s joy at the opening of a new John Lewis).

Four-bedroom detached houses in Skipton sell for about £400,000, or less in the surrounding villages.

What the local teens say It doesn’t matter if it’s a school night — bowling and a hot dog costs only £2.50 on Thursday evenings.
Stroud
The standard image of this once industrial Gloucestershire town is as something of a hippie haven, a new-age cousin of Totnes and Hebden Bridge. Away from the centre, however, the world’s first “bee guardian town” is all about healthy outdoor pursuits. There’s riding aplenty, while rugby is taken very seriously indeed — the World Cup-winning former England centre and royal husband Mike Tindall helps with the coaching at nearby Minchinhampton.

There are two outstanding state schools, Stroud High (girls) and Marling (boys), as well as plenty of private options. Kids may be more interested in the town’s Primark and New Look, but teenagers who want more gastronomic chains than McDonald’s will have to get the train to Cheltenham or Gloucester. Good-sized family houses are likely to cost well over £500,000 in the nearby villages, or a little less in the town centre.

What the local teens say The nearest Starbucks is miles away.
Dorchester
The big news for teenagers is the Brewery Square development, which has provided a cinema with an ensuite Nando’s, thus meeting most of their going-out needs at a stroke.

Ben Abbiw moved here for work from Watford, Hertfordshire, four years ago, bringing his son, Nathan, now 15, and daughter, Lauren, 17. “It’s a beautiful place to live,” he says. “When we got here, it took a bit of getting used to — it’s a more relaxed pace of life, whereas in Watford or London, everyone’s always rushing to get somewhere.

“It was a shock for Lauren and Nathan to leave all their friends, but everyone’s been welcoming. It’s the kind of place where everybody knows each other, so I can be relaxed about them going out and know that they’re safe.”

They both attend the local secondary, Thomas Hardye, which is rated outstanding by Ofsted. “It’s very good,” Abbiw says. “If you don’t do well, you can’t blame the school.”

One other small bonus: Dorchester is a forgiving place to take a driving test, with pass rates consistently topping 60%. (The national average is 47%.) Expect to pay £450,000 for a good-sized family house — and £200 for 12 lessons.

What the local teens say Can I borrow the car?

Chichester £495,000
Only a mile from the centre of town, this new-build has three bedrooms, including a large one in the loft to keep parents and teens safely separate. The house is due for completion this summer. The local broadband speed is a solid 37Mbps, which should be plenty for any data-hungry teenager (unless they’re looking to set themselves up as a hacker). 02380 713900, savills.co.uk

Altrincham £560,000
This semi in Timperley ticks all south Manchester’s teenage boxes. The four-bedroom house is a mile and a half from Altrincham town centre and a short walk from the Metro, for trips to the city. There should be no shortage of space — the large attic room, in particular, would be a comfortable place to do homework (or at least pretend to while catching up on The OA). 01614 012472, propertywide.co.uk

Skipton £675,000
For sporty teenagers, the Dales village of Embsay, on the outskirts of Skipton, is ideal, with local cricket and football teams, and a sailing club on the reservoir. This four-bedroom house has been refurbished, with a new kitchen-diner. For parents, there are countryside views and extensive gardens — though don’t expect the younger generation to help with the digging. 01756 700544, hunters.com

Stroud £675,000
Three miles south of Stroud, this is a classic five-bedroom detached family home, with — crucially — two living rooms, so the grown-ups can watch Apple Tree Yard while their offspring are playing Call of Duty. Unless they’re more soulfully inclined, in which case they can gaze at the panoramic views while penning embarrassingly heartfelt poems of lovelorn teenage alienation. 01453 270176, hamptons.co.uk