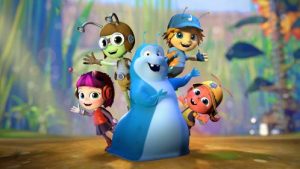 The relationship between children’s TV and pop culture has always been simple: if you dabble in kid’s TV and survive, you’ll be a star. Leonardo DiCaprio, Ryan Gosling, Jessica Alba, Jennifer Love Hewitt, Ben Affleck and, depending on your definition of survival, Britney Spears all broke through as child stars. What children’s TV doesn’t do is attract big stars once they’ve made it. Until now.

Coming up on Netflix this autumn is Trollhunters, a debut kids’ show from the director of Pan’s Labyrinth, Guillermo del Toro, based on his own book and starring Kelsey Grammer. Also on Netflix: Watership Down, with James McAvoy, John Boyega, Ben Kingsley, Olivia Colman, Nicholas Hoult, Freddie Fox, Anne-Marie Duff and Gemma Arterton, and — first out of the traps, in August — Beat Bugs, an animated series in which James Corden, P!nk, Regina Spektor and the Shins perform slightly tweaked Beatles songs.

What’s drawing these big names to the streamed screen? There’s the money, obviously. In January, the Netflix chief content officer, Ted Sarandos, announced that the streaming service would spend a big chunk of its $5bn (£4bn) 2016 programme budget on children and family content. That’s the kind of cash that works for Sony/ATV, publishers of the Beatles’ hits, as the Australian creator of Beat Bugs, Josh Wakely, discovered. “I would say, ‘I’ve got this amazing idea for a kids’ show, and all I have to do is get the Beatles rights.’ I thought it would take four months. It took six years.”

That Sony/ATV finally agreed to license the songs for a kids’ TV series confirms how important this televisual backwater has become. “Families are relatively underserved when it comes to ‘watch together’ programming,” says Andy Yeatman, director of global kids’ content at Netflix. “That’s an opportunity we are poised to take on. Guillermo del Toro can create a 26-episode epic adventure saga that will launch on the same day in more than 190 countries. This opportunity did not exist until Netflix entered the space.”

Children are the glue that makes subscriptions stick

For binge watchers of House of Cards, it may be a surprise that the company is spending heavily on fluorescent cartoons and glossy computer-animated series such as Dinotrux, about giant creatures that are half dinosaur, half construction vehicle. According to the media analyst Rich Greenfield, however, when Netflix launched a whole season of House of Cards at once, investors were terrified, fearing that users would sign up for the free days, watch the lot, then disconnect. Hip TV isn’t that great a business.

“It’s easy to cancel a streaming-service subscription — just one click,” says Robin Parker, of Broadcast magazine. “But kids hate it when their favourite shows go away. When cable TV was launched, it was sports rights that won viewers. Later it was first-run drama. Now it’s kids’ TV. Children are the glue that makes subscriptions stick.”

So, while Netflix works up its 35 original new series this year, including many from its 2013 deal with DreamWorks for 300 hours of TV programmes, it’s also sewing up a separate deal for Disney, with movies from its subsidiaries Marvel and Pixar, which will appear exclusively on the site from September. The movie deal so far covers only the US and Canada, but Netflix aims to make it global.

Meanwhile, HBO and Amazon are busy carving up the kids’ output from the non-profit American channel PBS. In January, HBO started showing Sesame Street, while this month Amazon snapped up the rest of PBS’s children’s output and commissioned a slew of shows.

A Canadian distributor, DHX Media, is going even further, buying up every kids’ production company it can. Co-founded by Bowling for Columbine’s producer, Michael Donovan, DHX owns almost 400 shows, including The Adventures of Paddington Bear, Inspector Gadget, Care Bears, The Herbs, Lassie, Sabrina and, since 2013, all of Ragdoll’s output, notably Teletubbies and In the Night Garden. In other words, Donovan owns your nostalgia — and he’s remaking it all over again.

“With kids’ shows, things that work tend to always work,” he explains over the phone from Toronto. “Things that have worked in the past are more likely, by a significant metric, to work in the future. But many of these shows were created for entirely different TV specs — they’re not HD-compatible and they’re not great on YouTube. So we’re remaking them.”

Donovan’s highest-profile revamp is Teletubbies, wrestled back to life last year and now filming its second season in a small studio in southwest London. Watching the shoot is surreal: there’s no CGI, just actors in fur suits who stay in character the whole time. Being introduced to Laa-Laa involves gasping for breath as you’re enfolded in Teletubby arms, the cry of “Big hug!” echoing in your ears.

It’s a huge investment. Over here, though, we’re in danger of selling off old classics and failing to develop new ones. According to figures from Ofcom, terrestrial British broadcasters spent £77m on first-run, UK-originated children’s programming in 2015, down 13% year on year and 45% over the decade. About 90% of that total comes from the BBC.

“Netflix is great at branding,” says Alice Webb, director of BBC children’s TV. “We’ve co-produced Watership Down with them, but they’re good at insisting that, however involved they are, they get to call the show a Netflix Original. That’s the way kids’ viewing is going, following programmes and brands, rather than channels. We’re trying to ensure public- service stories get told as well, and with live-action shows, not just animation.”

To spread these stories across the digital space, Webb pioneered the BBC iPlayer Kids app, launched in April. Already, 33% of viewing of the kids’ channels CBBC and CBeebies is via the iPlayer, compared with 2% for BBC1. And Sky has just revamped its children’s app, allowing downloads and an animated bedtime button.

You hope both will succeed, so our kids can continue to enjoy an anthropomorphic blob of clay or a slightly earnest school-based drama. Algorithms might make for the finest shows money can buy, but children’s TV needs shambolic, downright silly ideas, put together by eccentrics with worthy intentions; and, in that narrow field, we are best in class.